NTT Data presented at the International Seminar in Seoul

From November 12-15, 2018, “APEC FINANCIAL REGULATORS TRAINING INITIATIVE Regional Seminar on FinTech and Cybersecurity” hosted by Asia Development Bank was held in Seoul, Korea.  Mr. Nakagawa of NTT Data participated in this seminar as a guest speaker and gave a speech on business innovation by AI/RPA surrounding both financial and public sectors. This paper provides a brief description of the contents presented by Mr. Nakagawa at the seminar.

The FinTech boom over the recent years is not only for private companies but also for public-sector financial institutions including Central Banks and the Securities and Exchange Commission who attempt to utilize the advanced digital technology in order to innovate business process and enhance the secured application of the technology.

From November 12-15, 2018, “APEC FINANCIAL REGULATORS TRAINING INITIATIVE Regional Seminar on FinTech and Cybersecurity” hosted by Asia Development Bank was held in Seoul, Korea. This seminar aimed at introducing the latest IT technology and each country’s efforts to the staff of APEC Central Banks and the Securities and Exchange Commission. With the increasing focus on RPA/AI in APEC, Mr. Nakagawa, who is the Manager of RPA Solution Group, Social Innovation Division in NTT Data was invited to this seminar as a guest speaker for the program called “Artificial intelligence & Robotic process automation”.

The presentation started with “what is AI/RPA” and some AI/RPA use cases with demonstration on “WinActor” (RPA tool) and “DX-Suite” (AI-OCR) were presented. Also, Mr. Nakagawa introduced business innovation examples driven by the advancement of technology in financial and public sectors. The audience expectations toward RPA/AI was obviously high as 50 people from 10 countries continuously asked questions one after another. Answering as many questions as possible, the 90-minute presentation successfully ended with extra 20 minutes. 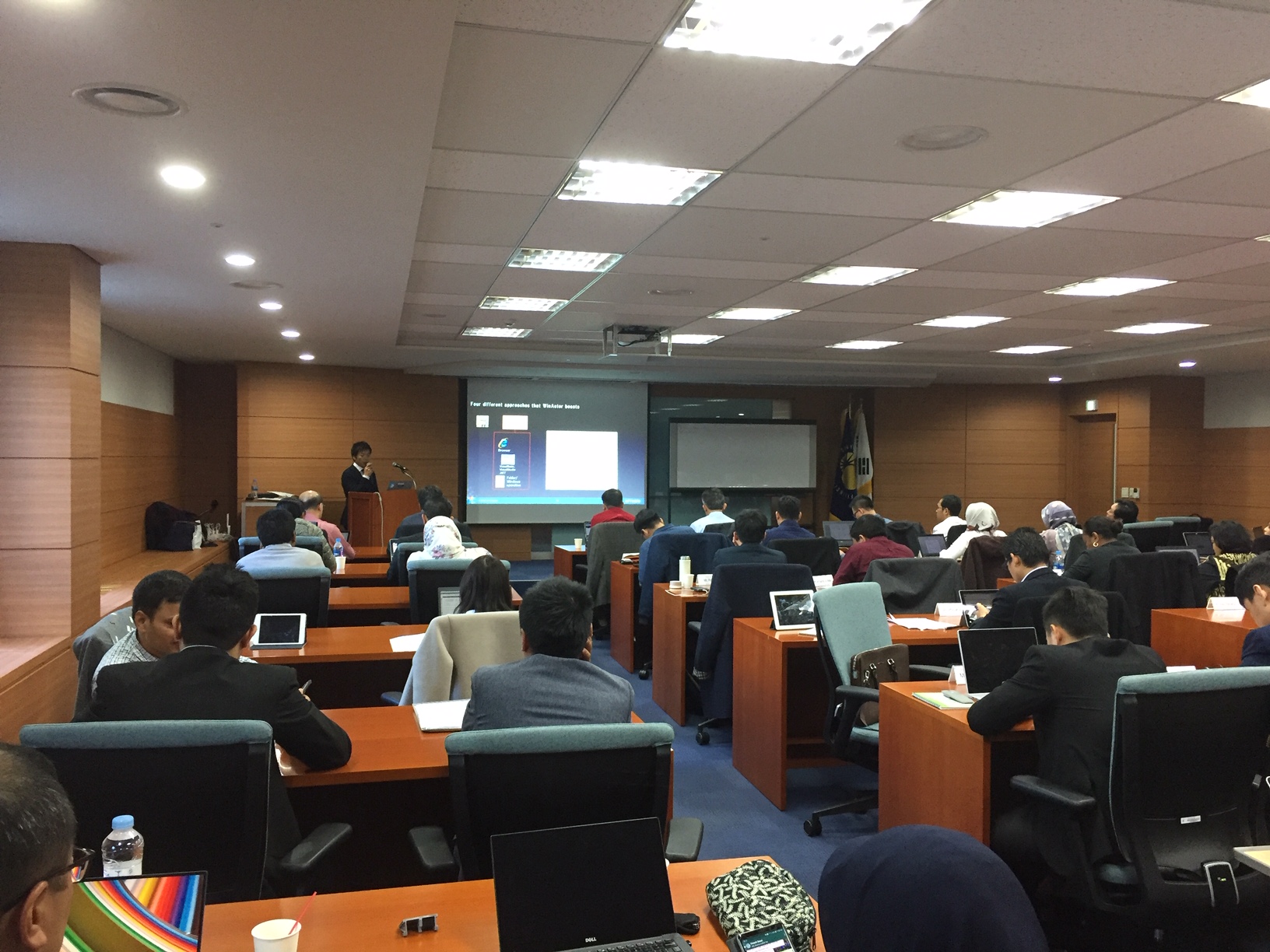 NTT Data’s presentation was in the morning session on Day 2. The seminar room was fully seated and the atmosphere there was full of enthusiasm to use FinTech and the advanced technology for business innovation in public-sector financial institutions.

Mr. Nakagawa, the manager for RPA Solution Group in Social Innovation Division has been vigorously promoting process automation and business innovation using advanced solutions such as WinActor, Prexifort-OCR, AI-OCR, and DX-Suite through various seminars in Japan. The speech in Seoul was our first time overseas presentation given in English.

In the speech titled “Digital Transformation & Business Process Innovation”, Mr. Nakagawa mentioned the Google DeepMind Challenge Match in 2006 which Google AlphaGo won over the legendary Korean Go player, Lee Se-dol. He explained “although AI was rapidly progressing, it has not reached to the level of perfect yet. AlphaGo is not so much good at playing chess as good at playing Go. The current AI can beat human capacity only when it is applied to the narrow sphere where a specific rule exists.

Mr. Nakagawa also explained, “Operations can be categorized into two types, one is a simple routine operation and the other is a complicated non-routine operation. RPA not equipped with AI is good enough if you want to automate simple routine operations.” Both surprise and eager anticipation were heard from the audience when he showed a demo video in which RPA was creating several documents automatically and explained “RPA works three times as fast as a human does. In addition, RPA works 24 hours a day while a human works 8 hours a day. That means RPA works three times faster and three times longer than a human”. 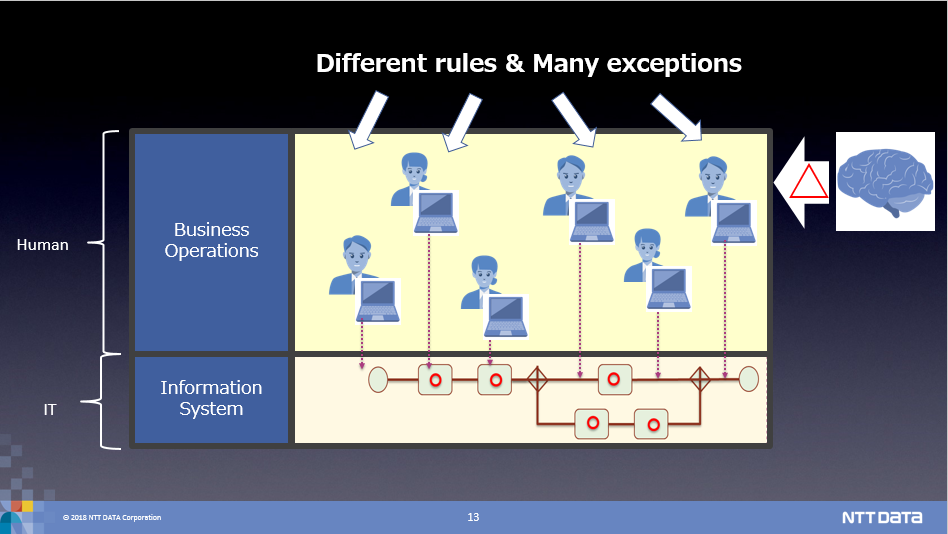 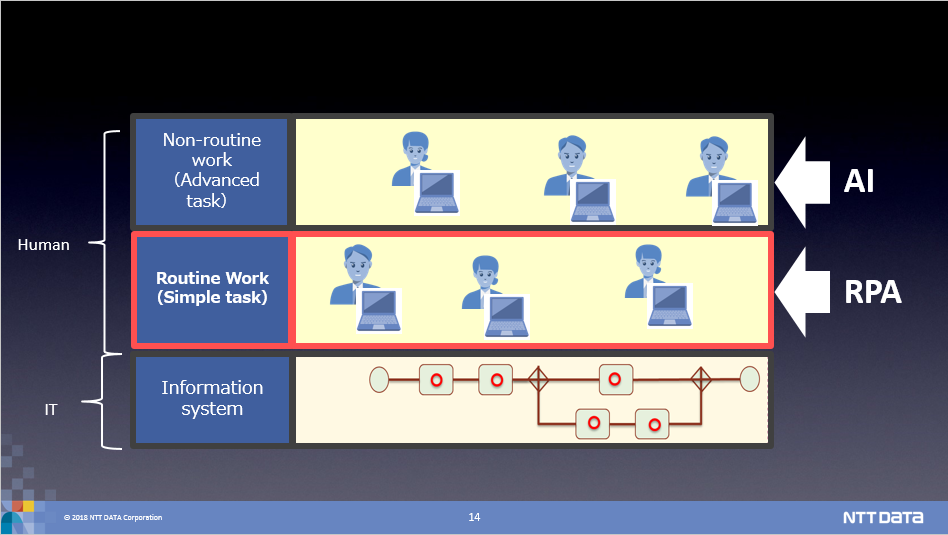 By introducing RPA, a large scale system development or ERP customization will not be required. Instead of increasing the number of personnel, a software robot will automatically handle huge volume of ERP operations. For instance, operations at Accounting, Purchasing, Human Resources, etc. are handled manually because the cost is relatively small and categorized as “out-of-scope” from internal system development. RPA easily includes this kind of operations into the target scope. “RPA contributes to not only improvement in operational efficiency but also quality improvement and stress release by eliminating human errors. 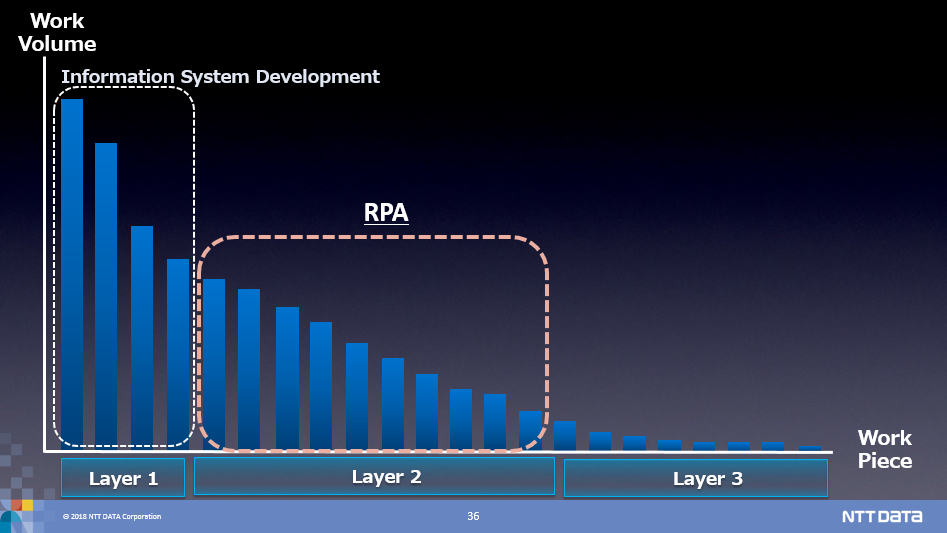 Ms. Chie Shimegi, the Assistant Manager of RPA Solution Group presented some RPA use cases using some demonstrations.
With a demo video of a railway company automating their SAP operations by WinActor, Ms. Shimegi introduced a case example of how they achieved operational efficiency by automating huge volume of routine operations including ERP’s data extraction and data entry processes. 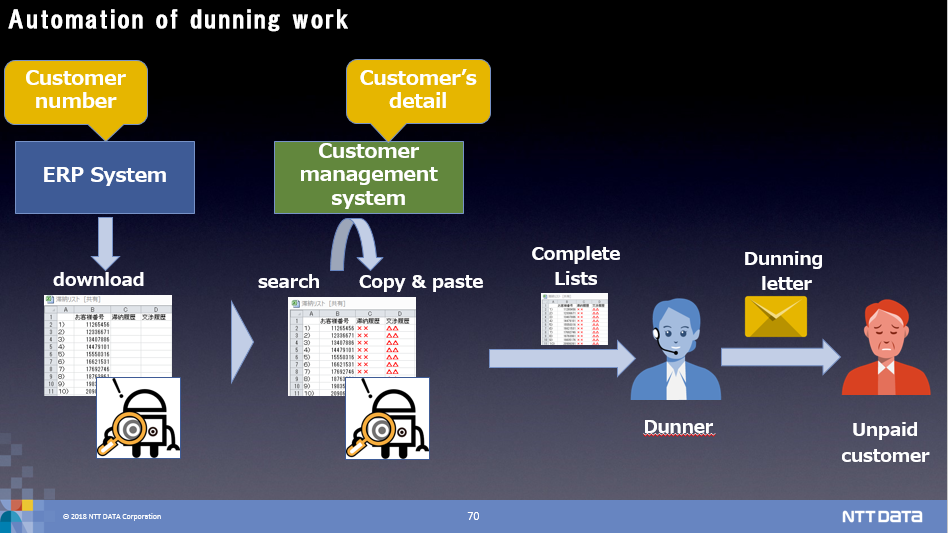 Cedyna’s use case was presented to share how they automated credit card screening/issuing operations by RPA. At Cedyna, they automated daily operations which were manually handled by the Credit division, such as requesting the Credit Card Association for information of dishonest dealers, saving the copied request number, and printing out the result provided in PDF. As a result, working hours of a person per a case was reduced from 3 minutes to less than 1 minutes. Ms. Shimegi emphasized the feature of RPA that can easily collaborate with online services without changing the conventional structure. This was the key advantage because without RPA, it was impossible to link the online reference service provided by Credit Card Association with the screening system. 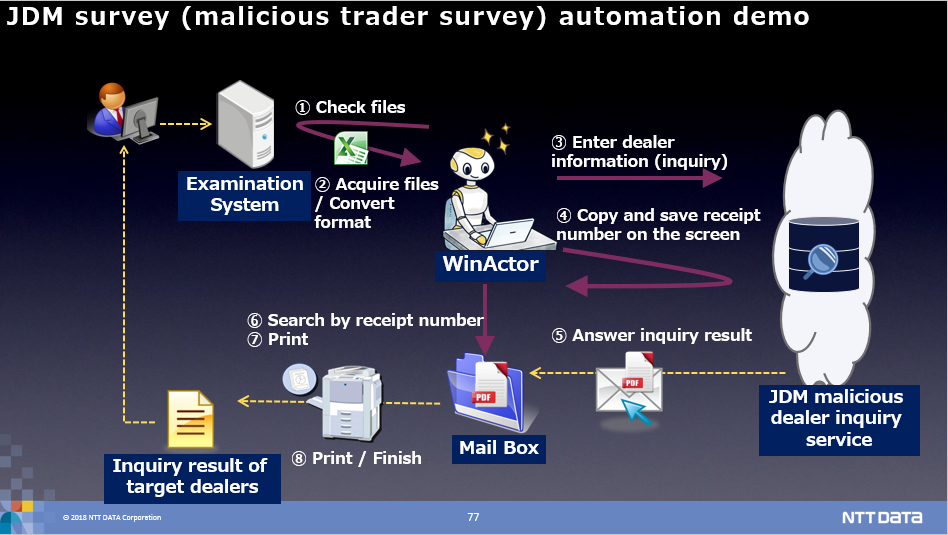 Summarizing the above, “digitalized information”, “repetitive operations”, and “those working under clarified operating methods and judging guidelines” are suitable for RPA.

Business scheme development driven by RPA was introduced with some case examples of Japan’s financial sector.

As an example of RPA applied in the consortium, a robot sharing, a new move among securities companies was discussed. In Financial sector, each securities company is required to report own activities to Financial Services Agency (FSA) based on the strict regulations imposed by FSA. Securities companies have individually automated it to mitigate this heavy burden put on each company. However, this operation was routinized and it worked under the same reporting methods, so they established a consortium and achieved further efficiency by sharing a robot for automation among members in the consortium.

This move is led by business process visualization by RPA. The consortium of securities companies works based on the idea, “be cooperative to streamline back-office operations” and “be competitive on customer acquisition”.

Subsequently, DX Suite of AI inside was introduced as a use case of IPA/IRPA solution. DX Suite is an AI-OCR solution developed by AI inside which NTT Data recently announced business partnership with. DX Suite uses AI model on cloud and accurately recognizes handwritten texts with multiple lines without text boxes. Moreover, by collaborating with RPA, this OCR solution can automatically perform a series of operation from digitalization of written materials and processing of digitized data without a human intervention.

For example in financial sector, it would be possible to automatically complete questionnaire for a quarterly ‘tankan’ survey released by the Bank of Japan.

Also in a demonstration using Amazon echo, automation without using a PC was presented. Instead of using PC, WinActor uses AI speaker to execute a scenario. The demonstration showed AI speaker accurately conveyed user’s verbal request to WinActor, WinActor started checking up the schedule in Microsoft outlook, and then set up a meeting as requested.

In ending the presentation, Mr. Nakagawa mentioned back in the days when financial institutions didn’t trust a newly developed calculator claiming “it is like a black box” and “the results of calculator always have to be double-checked with Japanese abacus”. Now, calculator is a standard and necessary tool for calculating data effectively. He explained, as we once experienced before, we were in the transition period from a personal computer to a robot for business automation. In conclusion, he emphasized that it would be crucial for us to keep up with the latest technology transition.

After the presentation ended, the audience asked various questions about AI and RPA, “what is so innovative about RPA?”, “How does AI or RPA handle sensitive information?”, and “how much flexibility exists in the scope for automation?” that indicated their strong interest in AI and RPA.

Mr. Nakagawa received a Letter of Appreciation from the Asian Development of Bank

Mr. Nakagawa received a letter of appreciation from Mr. Yasuyuki Sawada, the Chief Economist of the Asian Development Bank (ADB) which hosted this seminar event. 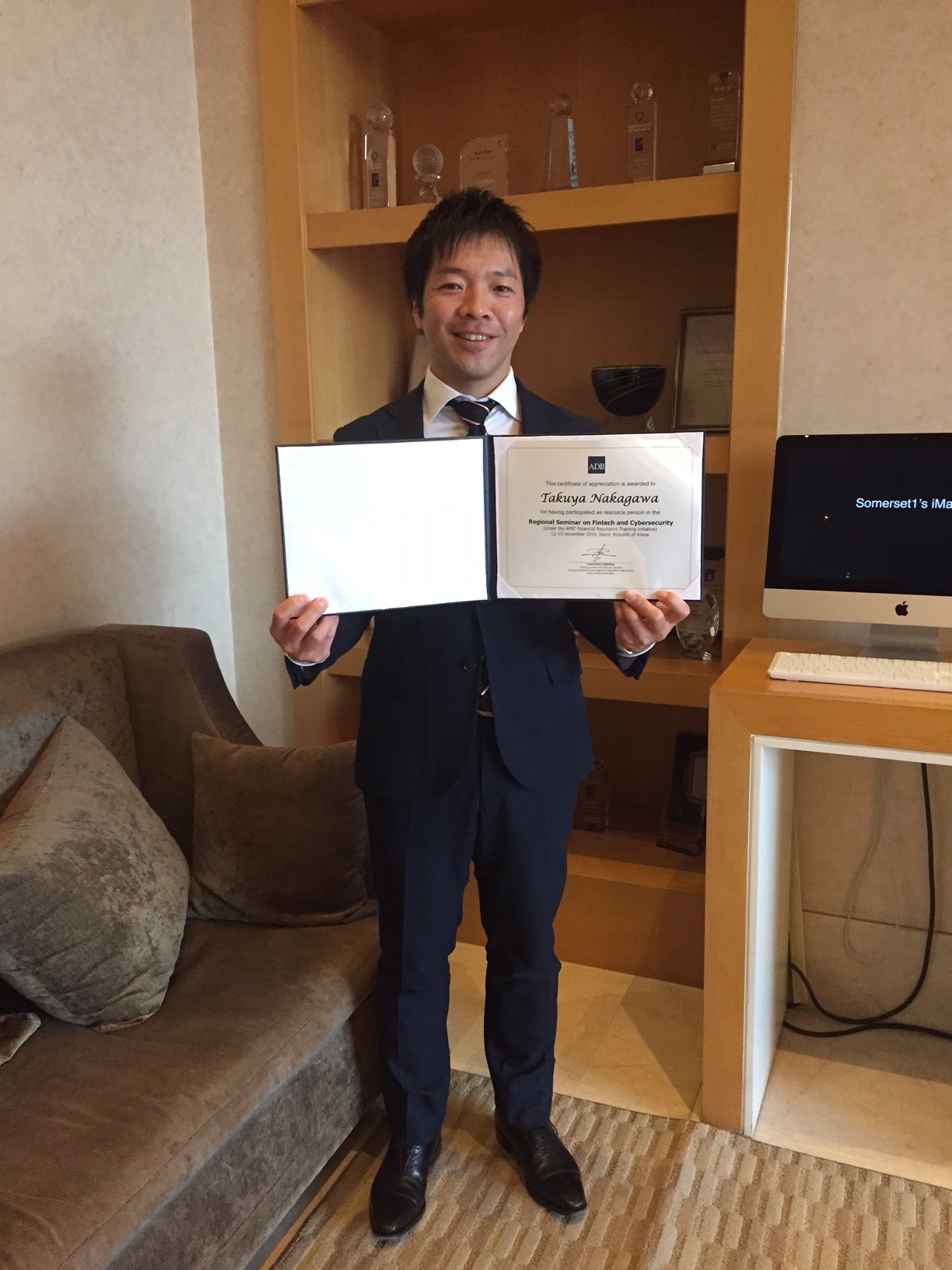 After the event, we had business meetings with our distributors, NTT DATA Services Korea and ALBANS AI respectively. Through the fruitful discussion with them, we could gain important insight on market trend and customers’ needs in Korea. Although the use of RPA has been increasing in Japan, Europe, and the U.S., only a part of leading companies in Korea just started working on automation using RPA that means this is the critical timing in the spread of RPA/AI.

The industry which boasts high volume routine operations and paperwork is not only limited to financial sector, but public institutions also can be expected to achieve business transformation in large scale by using AI-OCR. If we don’t extend our sales activities in those markets now, our competitors will undoubtedly accelerate their expansions. RPA Solution Group of Social Innovation Division in NTT Data currently provides WinActor to 2,000 users winning the No. 1 share in Japan.  We are also increasing the overseas sales focusing mainly on overseas branches of Japanese companies. We’ve also sold some licenses in Korea.  Collaboration with AI-OCR, a new business which we’ve just started will be expected to streamline business efficiency and improve business value in term of quality and speed by enabling a lot of institutions where they have to deal with tremendous amount of paper works to automatically handle those written documents without human intervention in a business flow. We will continue expanding WinActor sales and moving faster than the competitors so that we will not miss this great opportunity.