Office Robot is an RPA (Robotic Process Automation) solution developed by NTT Group. Having engaging functions proven by various business achievements, Office Robot is aiming to be the RPA which is supporting humans’ activities and seeking constructive relations with humans.

※The number of confirmed deals as of August 1, 2018.(The total number includes direct contracts between NTT Data and end-users as well as our distributors and their end-users) 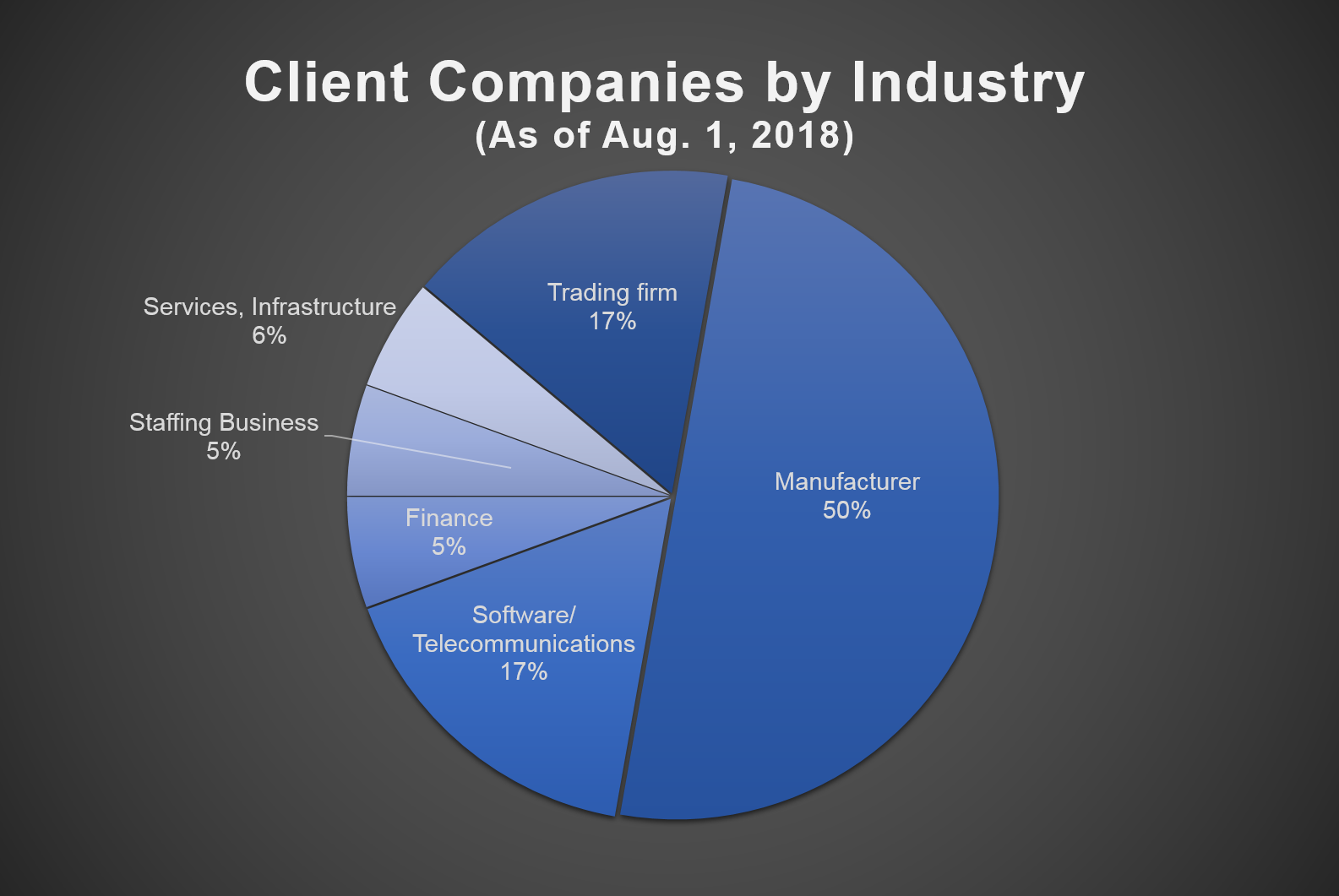 What can RPA do?

RPA automatically handles computer operations which have been performed by humans. RPA can process almost all kinds of operations without limiting the scope of work or the target applications for us. 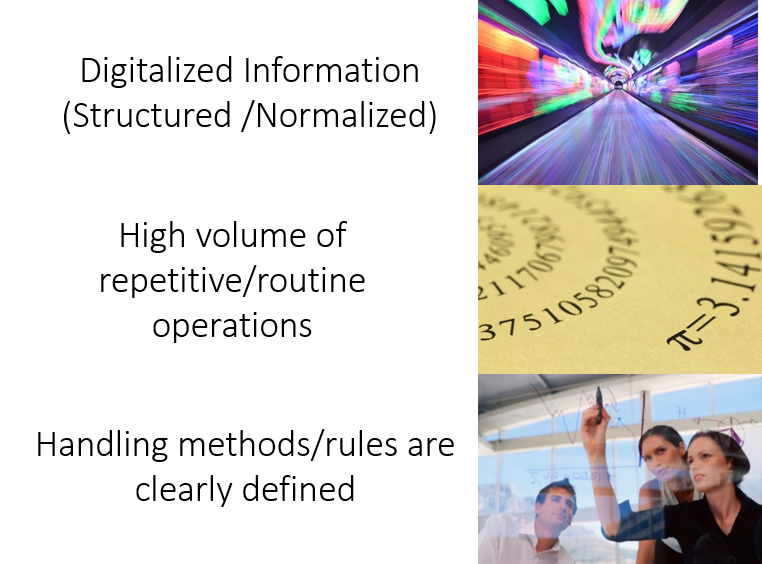 Office Robot is a software robot which learns and comprehends how to manipulate Windows applications. Office Robot can automate almost all kinds of operations without limiting the target applications. The simple and easy scenario creation enables any users can easily utilize Office Robot without programming skills. Office Robot allows users to be flexible to determine when and where the streamlining plan will be implemented. Users can focus on their primary operations and new business chances by having Office Robot take care of their routine operations.

The Features of Office Robot (Details)

Office Robot is equipped with various favorable features. The chart below shows Office Robot’s features which are highly rated by the users.

What Office Robot can handle for you

Office Robot can handle Windows applications, internal systems, ERP, and OCR. From creating input data to uploading data in systems, Office Robot automatically processes various operations for you. Also, users can flexibly select the levels of human intervention to be required for controlling a scenario.

Office Robot is easy and simple to use! Users are not required to have special skills such as programming knowledge for scenario creation. Users can automate operations on the very same day of installing Office Robot. Also, users can easily add functions and edit contents in scenarios to meet the specific requirements of each operation.

How to automate operations ～Create Scenario～

Record your operations with Office Robot. Start Office Robot, select a recording mode, and then start PC operations as usual. Office Robot automatically converts your PC manipulations into a flowchart for creating a scenario.

How to automate operations ～Edit Scenario～

Users can add Nodes and Libraries to the scenario which Office Robot automatically creates by recording your PC manipulations or separately designate the target data to enhance its contents. The accuracy of reproducing humans operations will be increased by adding decision-making or looping processes. Users can find various kinds of frequently-used-operations in the Library. Using those libraries allows users to avoid recording every action to be required for a scenario creation. Your operations will be automatically converted to a flowchart. Users can visualize the contents by naming each node, which allows any users to understand and edit the contents. 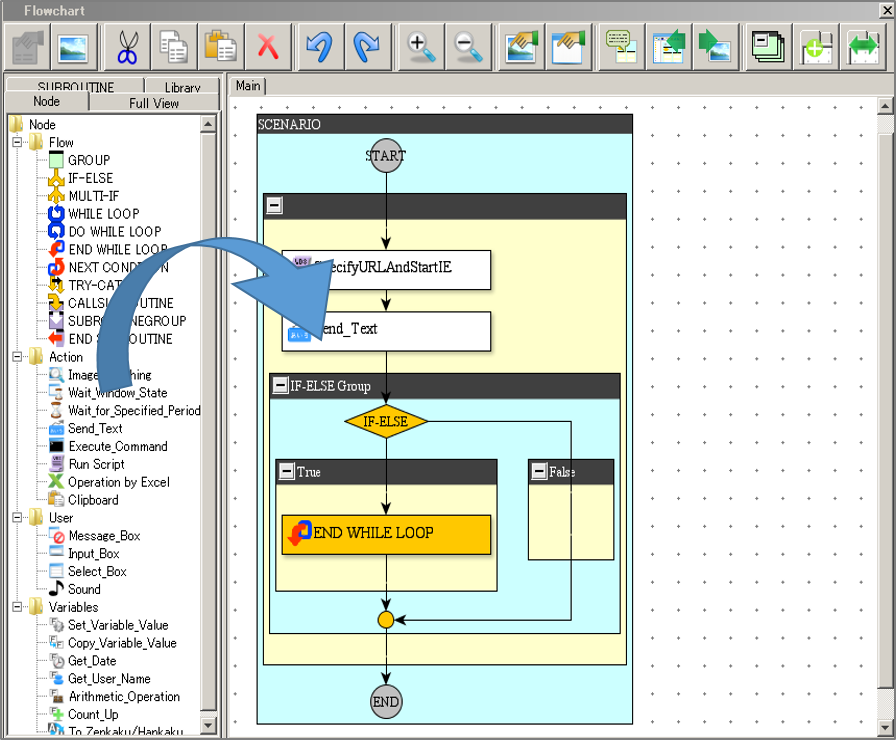 How to automate operations ～Run Scenario～

The “Run” button starts running your scenario. The running speed is selectable in the range from 0 to 10 to streamline operations in terms of “quickness”. Users can even automate “starting Office Robot” by using task scheduler. 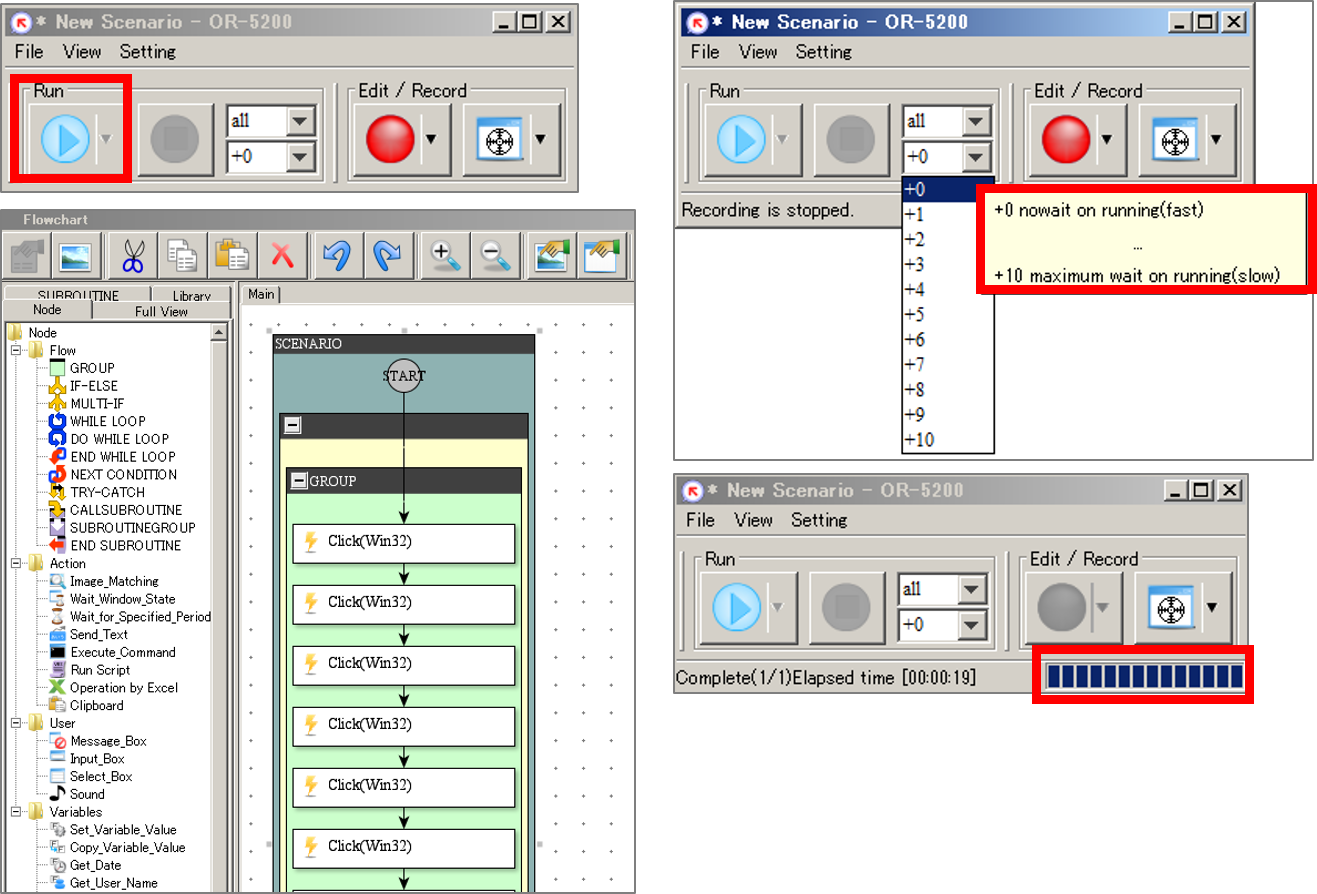 Path for full-scale operation of RPA 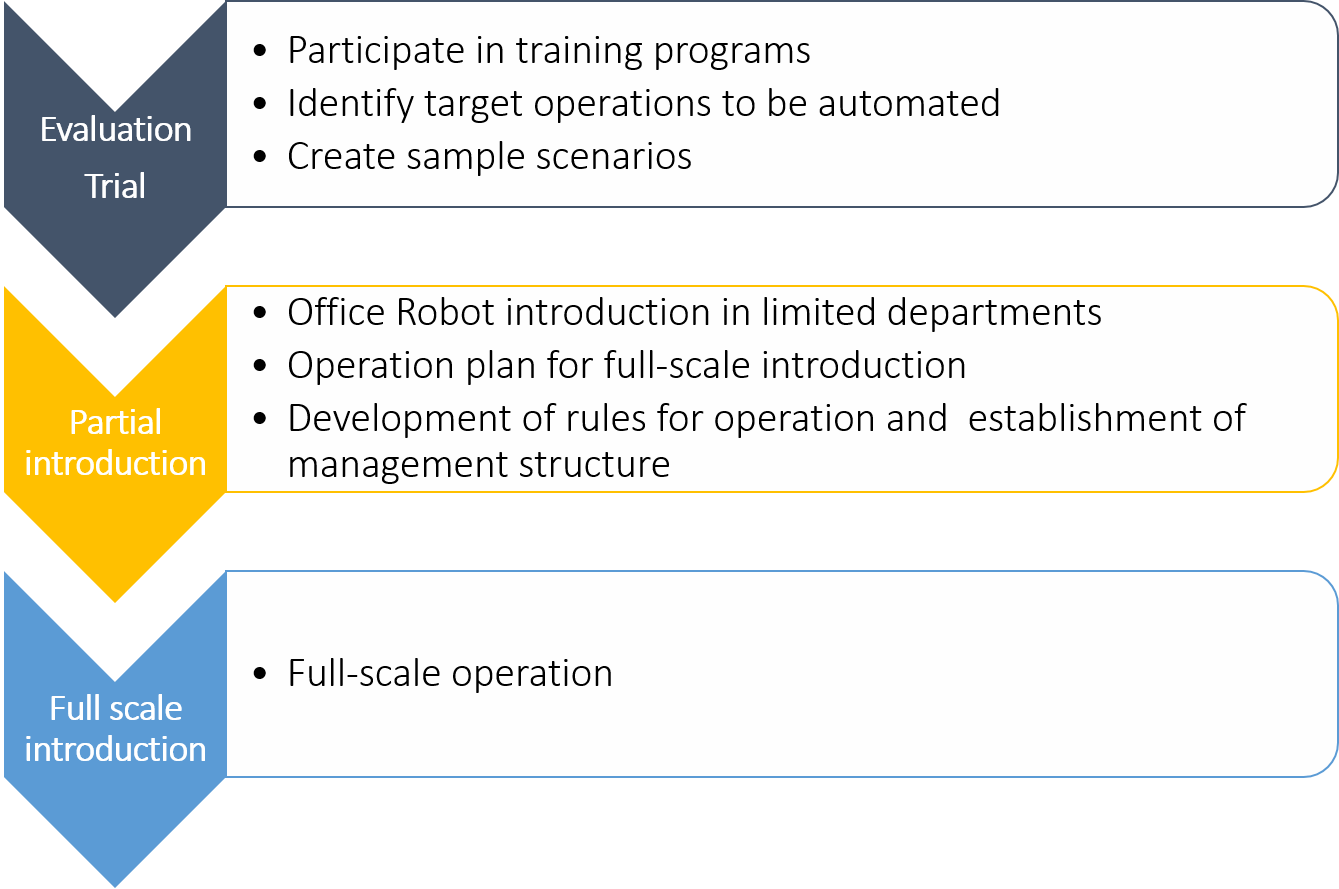 ・The 1-month evaluation license with fee and various training courses are available for users to learn about Office Robot.

・Identify the operations to be automated in your company.

・Break down the selected operation into steps and create a scenario. Then, run the scenario to start a PDCA cycle.

・Review the outcomes, challenges, and improvements after using evaluation license and develop a plan for full-scale operation.

・For RPA full-scale operation in company, develop an established structure and regulations to support and maintain RPA introduction.​ ​

We offer various support services including “Consultation for applicable operations” which supports users to identify suitable operations and maximize RPA features in their business and “Training courses” for those who are aiming to improve their technical skills to utilize Office Robot. From introduction to support after full-operation, please feel free to let us know if you have any questions!​ ​

*This recommended specification assumes the environment where a single Office Robot or WinActor is running. If you expect the target applications will consume CPU, Memory, HDD, etc., please prepare a high-end hardware in advance.

*There might be a noticeable decline in its responsive where CPU, Memory, and HDD are operated at a hight rate.​ ​

*When multiple remote logins in a single Windows Server are made by a single user simultaneously, please disable “Clipboard Sharing”.​ ​

*Touch-panel operation is out of scope of the recording function.

For further information on Office Robot, product demo, pricing, or more; Please contact our distributors in your area!

Send us your inquiry

Inquiry for our product