Office Robot automatically manipulates Windows applications for users, whereas WinDirector® plays a role as a kind of Office administrator who centrally manages and controls Office Robot or execution robot to supervise its execution. WinDirector® provides counter approach for “stray robot”, governance controls, and progress status monitoring for users who wants to focus on controlling robot operations.

Appropriate robot management allows users to maximize the potential of the robot who works for you. Users will face several issues as the target operations to be automated are expanding as below.

*1 Stray robot・・・Robots which were once owned by someone or some project but no one knows its original owner or original purpose and currently being abandoned.

WinDirector® is an operation tool which supervises and controls Office Robot.

WinDirector® works exceedingly well for a company-wide systematical management where dozens or hundreds of Office Robot licenses have to be organized.

After the evaluation license guarantees the positive effect of WinDirector® operations in your company, the procedure for full operation will start. Before moving on to a company-wide full operation, users are required to develop a management structure to deal with several issues such as those mentioned above.​ ​

Especially, users with more than 100 licenses need to build the structure for management control to achieve a company-wide efficient operation before starting the full-operation.

WinDirector® is a management robot which was developed to satisfy customers’ needs.

WinDirector® is equipped with various features which will be solutions for several issues such as those previously indicated and plays a role as an office administrator for users.

Available features are as below.

The chart below shows a sample flow of central management by WinDirector® where Office Robot (Client/Server) has already been installed. 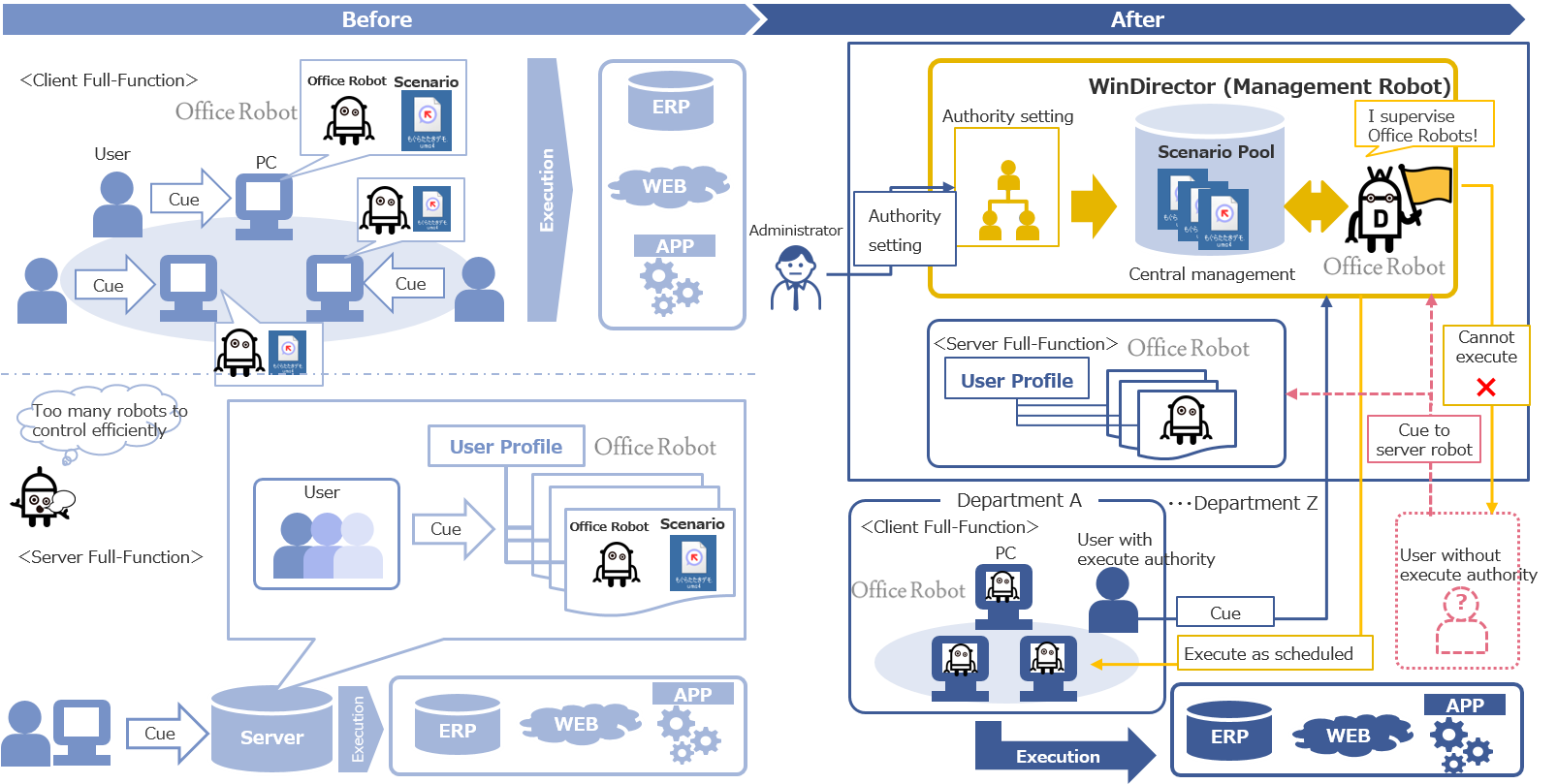 WinDirector® enables users to centrally manage all scenarios and grant appropriate authority (View/Edit/Run) to users on group or department basis and achieve good governance and management control in a company.

Any kinds of Office Robots (both client and server) can be controlled by WinDirector® for efficient operation.

The recommended operating environment for execution robot (20 units or less)

Recommended specs assume the number of execution robot is 20 or less. CPU and memory usage vary depending on the contents of scenario, so an appropriate sizing of machine specification is recommended for 21 or more robots.

We are looking forward to your inquiry. For your inquiries on WinDirector® (more features, product demo, pricing, etc.), please contact our distributors!

Send us your inquiry

Inquiry for our product